I turned this classic on its head and then shook it around. May I present strawberry and ricotta salad!

My first encounter with these sneaky berries edging over to the dark side was strawberry and black pepper sorbet at a restaurant I worked in. It was delicious and encouraged a successful attempt at cooking strawberries in balsamic vingar (for a cheesecake topping, if I remember correctly). It was on a trip to Barcelona that much to my surprise I found them in my salad! 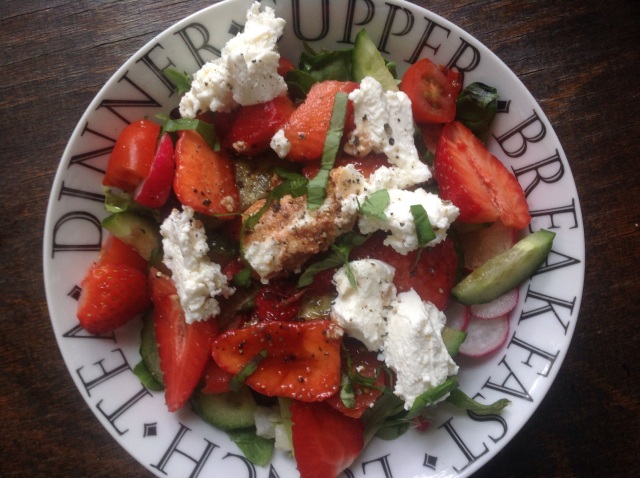 I didn’t plan this one at all. In fact, I bought the strawberries for topping angel food cupcakes (that’l be the next post folks!) but I decided to chuck a few in my bowl along with the usual suspects: leaves, cucumber, radishes, balsamic vinegar and olive oil. I had some ricotta too, which os only a step away from cream really. The whole starwberries and cream thing only just occurred to me! It made a really nice change, gorgeous and summery! Some walnuts would have been perfect. Oh, and I spinkled on some fresh basil from my little basil plant which is battling away in my tiny kitchen.

I LOVE cheese. I baked the sweet potato in halves as it was so big, this results in a crispy layer of flesh which. I gently lifted up and filled with parsley, chedda and feta cheese. Basically what I had to hand. And popped it back in the oven while I threw together my salad – with sugar snaps mmm-m! Simple as can be!  And next to no prep work! All you need is a bit of time while the potato bakes 🙂

As summer draws closer, the barbecues get pulled out of their sheds and dusted off. Or just set fire to. Barbecues are all about the meat. No one can argue with that. But it doesn’t mean its all doom and gloom if your a veggie! Far from it, I find my veggie contributions often get wolfed down faster than the sausages. Which can be frustrating at times, but I take it as a compliment. Providing I get to eat some of it first!

Today I’m sharing a delicious speedy mushroom burger, I admitedly didn’t actually bbq this one but I’m looking forwar to testing it out at our next one! Mushrooms are excellent for soaking up flavour and are a great quick alternative to making veggie burgers.

Marinade slices of Hallumi and a Portabello Mushroom in smoked paprika, piri piri grains, salt, peper, olive oil and a dash of soya sauce/ tamari. The longer you leave it the better, but it still packs plenty pf flavour if you bung it all on and cook it straight away, adding the soya towards the end. Fry/Grill/BBQ until the Hallumi is golden and the mushroom slightly soft (I like a bit of bite). Pop it in a bun or a pitta bread with fillings of your choice. I fried some onions too which I had with lettuce and coleslaw.

This is a lovely summery dish inspired by my time in Sicily, the lady I stayed with cooked almost all her fish like this, our tomatoes don’t quite do the dish justice but its as good as it gets!

Simply pop your whole fish or fillet on a large piece of tin foil, add sliced onion, garlic, parsley, cherry tomatoes, slices of lemon, season and drizzle with olive oil. Wrap it up and pop it all in the oven at 200c for 15-20mins, until the fish gently flakes apart with fork. I put some carrots and thinly sliced new potatoes around the edge of the tray which cooked in the same time.  END_OF_DOCUMENT_TOKEN_TO_BE_REPLACED 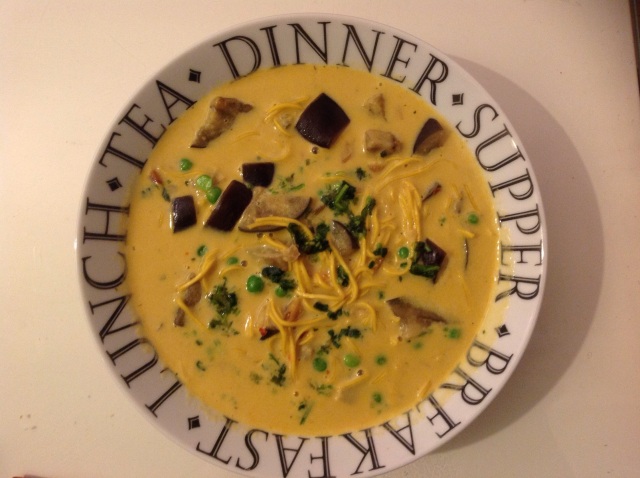 This is really simple and delicous. Massaman curry paste is a new addition to my life and one I won’t turn away from anytime soon. Unless I get it together and start making my own curry paste… One day, one day! Its not very spicey and kind of sweet. For this spontaneous soup I used up the veg in my fridge, they worked really well together and feel free to follow them or use whatever you have! I ‘d love to hear what you like massaman curry paste with!

Fry onions, garlic and ginger untill golden. Add diced aubergine and a large teaspoon of massaman curry paste. Fry until aromatic. Add coconut milk or coconut cream, simmer until the aubergine is cooked then add a handfull of noodles or two and some frozen peas. Depends how much you want! Be carefull not to overcook the noodles though! Follow the packet onstructions, usually between 3-5 minutes. If you have any fresh coriander chuck some on top and enjoy!

I love using aubergine in vegitarian cuisine, its a great meat substitute due to it’s spongy consistency, it absorves flavours and lets out its own juice similarily to meat. I don’t bother salting it as I never remember too.

It is said G makes the best arepas in his whole family. Now, I’ve only ever tasted his, but I believe it because they are delicious! Arepas are a staple part of Colombian gastronomy, like our bread here. You could probably classify them as a flat bread made from maize. They eat them for breakfast and/or dinner with whatever you have to hand or like. Again, like bread. G likes his with fried eggs, my aunty likes hers with avocado and cheese. I have been nagging G to teach me to make them for sometime and this weekend he did!

END_OF_DOCUMENT_TOKEN_TO_BE_REPLACED

I’ve decided to share savoury dishes too! All good food deserves to be on The Goody Blog after all.

My uncle is Columbian and has introduced a love for Mexican food in the family. One of my favourite things to do when I first moved to England alone at 17 was to go to my aunt and uncles for wraps with tones of guacamole! We had tacos rarely as they are more fiddly I suppose… Another good dish was tortilla chips with all the wrap condiments piled on top, covered with cheese and heated until melted in the oven. Mmm! Kind of like greedy tacos actually!

Anyway, here are my tacos and my first try at making them vegetarian.